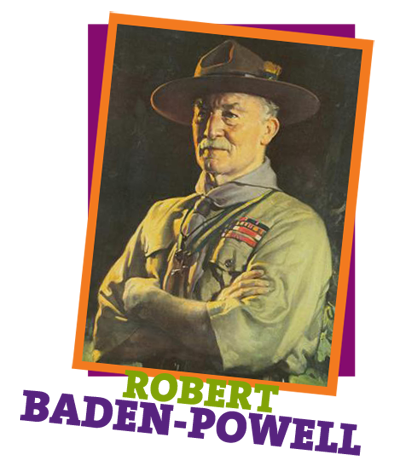 Scouting was started by Robert Baden Powell who was a soldier in the British Army a century ago. His experiences in the army inspired him to teach boys adventure and life skills while having a lot of fun with their friends.

He wrote “Scouting for Boys” and it started a Movement which swept the world in 1907. He tried out his ideas in a camp on Brownsea Island in England. This was the very first Scout Camp·

Ireland was one of the first countries to have Scouts· Now Scouting Ireland is one of the biggest youth organisations in the country.

Scouts across the world greet each other with a left-handed handshake. This is a sign of trust and friendship. There is a story that when Baden Powell entered the city of Kumasi in Africa, he was greeted by one of the Great Ashanti Chiefs. Baden Powell saluted him and offered his right hand as a sign of friendship. The Ashanti Chief moved his shield from his left hand to join his spear in his right hand, so he could shake hands with Baden Powell. When asked why he shook with his left hand, the Chief said that by offering his left hand, which traditionally holds a shield for protection, he was showing his trust to his new friend. Without the shield he would be open to attack.

To serve my community To help other people and

To live by the Cub Scout law

Cub Scouts can be Trusted